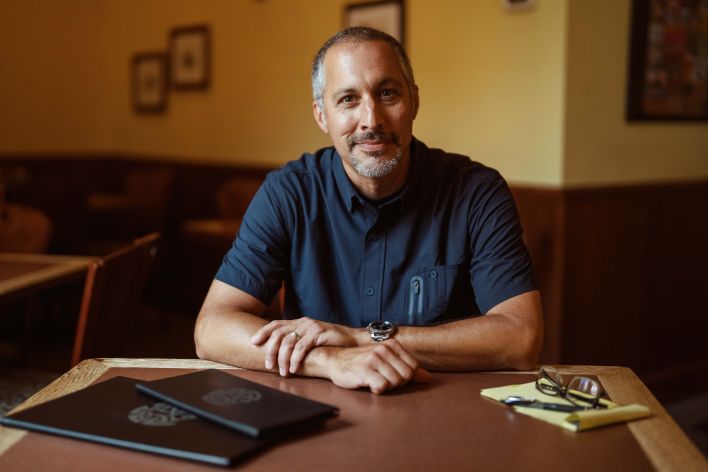 I’ve wanted to own my own restaurant ever since I was a kid. I started in the restaurant
business at Bill Knapp’s in Ann Arbor, which was where Zingerman’s Roadhouse is
now. After graduation, I started working for a guy named Kevin Downey.

The year I started working for Kevin, he was the owner of a restaurant called Fox &
Hounds in Bloomfield Hills. I was just out of college, and getting that job was like
winning the lottery: I learned more there than I actually learned in my four years in
school.

Honestly, I was surprised he hired me at all. One of the questions I was asked was,
‘You are brand new out of college. You’re really green and you have zero experience as
a manager of a multimillion-dollar restaurant. Why should I hire you instead of the guy
who has 10 years of experience?’

I said, ‘If you don’t hire me, I’m going to go work across the street for your competition
and I’ll put you out of business.’

That’s a pretty arrogant thing to say, but he hired me anyway. Once we got to know
each other, I asked him why he hired me after I said something as arrogant as, ‘I’ll put
you out of business if you don’t.’ 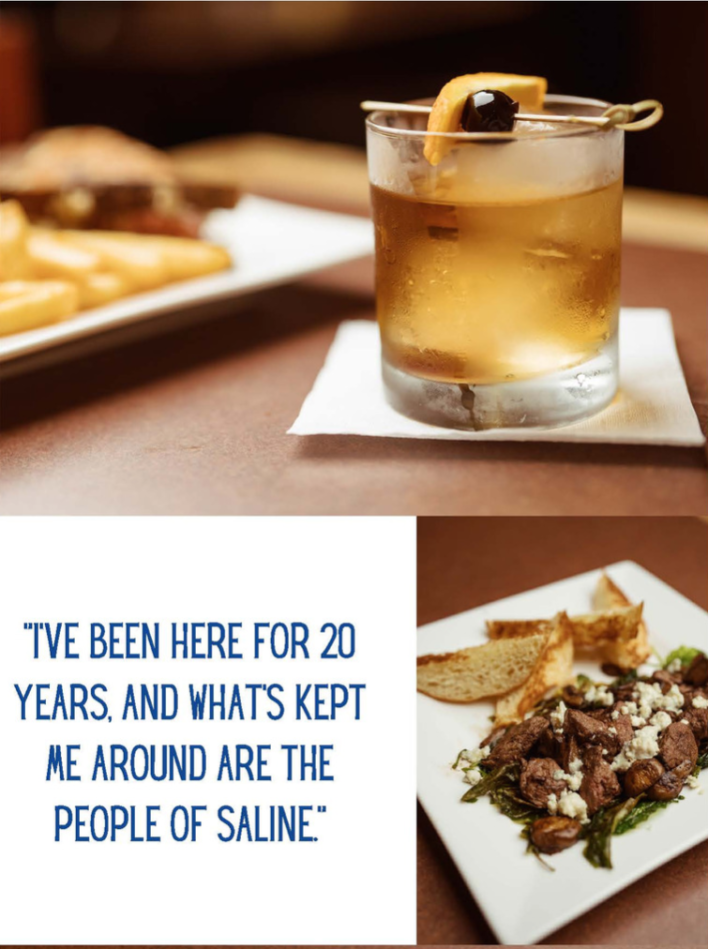 He said, ‘I didn’t want to take that chance. Maybe you were that person, maybe you
weren’t. But if you were that confident in yourself, I decided to be, too.’

I worked there for three-and-a-half years, and then slowly started working my way back
to this area. I lost my father in 1990, my mother was getting older, and my sister had
moved to Saline. It was time to be close to home and take care of my family, so I started
looking for a place to open a restaurant.

Today, I’ve been here for 20 years, and what’s kept me around are the people of Saline,
people who over the last 20 years have come in and supported my business. There are,
of course, always new people who say, ‘Hey, we just moved in down the street’ or ‘We
just bought so and so’s house and they told us to come in here,’ and they become a
new regular. But about 85% of our customers are regulars, and without them, I wouldn’t
be here.

Plus, I can’t not say this—the other business owners are great. I’m friends with many of
them or friendly with most of them. Like Wally, who owns Mac’s across the street from
me. Yes, we compete with each other for the same dollar out of that same person’s
pocket. But if I need a half dozen lemons, I can walk down the street and say, ‘HeyWally, can I have a half dozen lemons?’ and he’ll help me out. I don’t even have to ask
anymore; I just go into his cooler and grab a half dozen lemons. And it’s the same for
him to come over here and borrow something, too.

When I started the company, I still didn’t have a name for the restaurant. I was coming
into Saline from Novi, down Michigan Avenue, and I’m like, ‘Do I name it Paul’s?’
There’s already a Kelly’s Pub next to me, a Dan’s Tavern across the street … next door
to me over here was Mac’s and a few more. So, I decided not to call it Paul’s based on
that. I was driving into Saline one day and I saw a sign that said, ‘Saline Sister City:
Brecon Wales.’ So, then I thought it could be Brecon something. A pub, a shack, a
tavern, a grill. I didn’t want to call it a bar, and I wanted to offer food … so I started
looking at Europe and how they spelled grill with an ‘E’ and then I went to the city and
the mayor was all for it.

We opened as Brecon Grille on July 2, 2002. People would come in knowing there was
food, but a lot of people didn’t know they could come in and have a drink.
In 2008 or 2009, we started thinking about what else we could add to make people
understand they could come here in the evening and get a really good Michigan craft
beer or a cocktail. That’s when we added pub to the name and we have all these
pictures here of pubs from Brecon, Wales on this wall.

The city of Brecon in Wales is Saline’s sister city, so that’s where the name ‘Brecon
Grille & Pub’ comes from.

But that’s not the name you’ll see on your credit card slip.

My brother was in the military, an Air Force pilot flying Black Hawk helicopters. A lot of
the kids, military brats or whatever, would look at his nametag and couldn’t pronounce
our last name ‘Geragosian,’ so one time a kid called him, ‘G-123456789.’ That turned
into ‘G-9’ and the name stuck.

One year prior to me getting this property, around Thanksgiving, he came to visit the
family, and we’re all sitting around chatting at Atwater Brewery in Detroit.

‘I really want to open my own restaurant,’ I say to him.

I told him it was a big risk, that one in five restaurants fails the first year and that out of
those that survive, one out of 20 makes it five years. I didn’t want to fail and be a
statistic.

‘You’re flying a helicopter, your dream! You’re living your dream!’ I say to him.

Then he says to me something I’ll never forget: ‘And if you try your restaurant, then
you’re living yours. But if you don’t, you’re not.’

That was Thanksgiving 1999, and on December 9, 1999, he was killed in a plane crash
in Kuwait. So, that stuck in my head. When I was doing the paperwork for my liquor
license, I wanted to pay homage and respect to my brother and father—and for being a
Geragosian.

So I started a company called G-9 Taverns Inc., put that on the paperwork, and that’s
what shows up on your credit card slip.